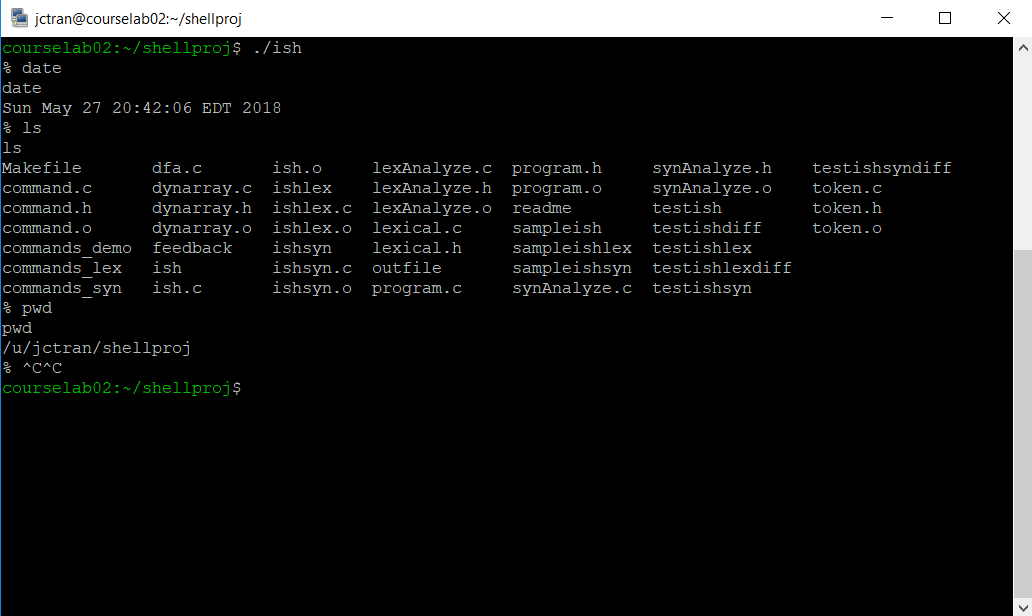 Creating a functioning Unix shell boils down to a 3-step process:

Step 1 is achieved by simulating a DFA in which each state is determined by the character read in from a line of input. The states result in the creation of an “ordinary” or “special” token depending on the type of character and adds these to a dynamically sized array that will be later processed into a single command in the second step.

Special characters are denoted by “<” or “>” and indicate that the following tokens represent a stdIn or stdOut file that input or output will be redirected to. 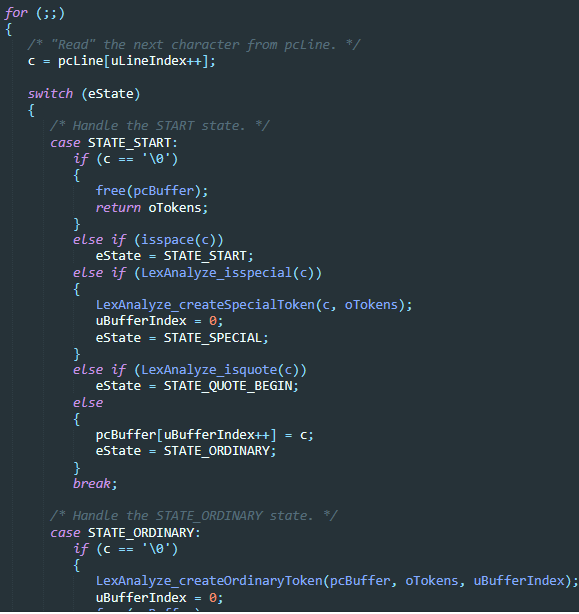 Step 2 creates the command by parsing the tokens found in the dynamic array and associating the correct fields with each token. For instance, the token following a stdIn or stdOut redirection token (< or >) must designate the name of a file. Additional arguments for commands that require arguments (such as “cd”) are also considered. A data type contained in command.c/h applies these fields to the tokens.

After processing all the tokens and forming an argument, Step 3 is implemented by handling external commands that are handled by the OS such as “date”, “vi”, and many more. This is done through a simple fork() process that then calls the command with execvp().

In addition, built-in commands native to the Shell are manually implemented in a variety of static functions found in ish.c handling the setting and unsetting of environment variables, the “exit” command, and “cd”.

The shell also has a unique way of exiting via keyboard shortcuts as handled by signal handlers. The standard Ctrl-C shortcut exits the shell immediately if a child process is being run via a command but only exits the shell when the parent process is stagnant if Ctrl-C is inputted twice within a 3s period. 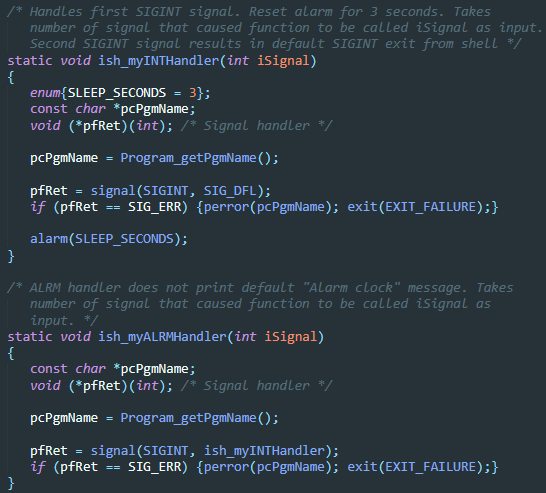 For example, the first time a user inputs Ctrl-C while the Shell is not handling a process triggers the SIGINT handler that calls a 3s alarm. At the moment, the SIGINT does not cause the shell to exit as normal and instead calls the alarm. The second time the user inputs Ctrl-C within the 3s window, the signal is then passed from the alarm signal handler back to the SIGINT handler which resets Ctrl-C to trigger a default SIGINT signal, exiting the shell.

ish.c: Executed and displays Shell while calling each step of the process. Contains functions handling all built in commands and passes external commands to the OS to execute.

lexAnalyze.c/h: Lexically analyzes a line of input text per Step 1 and produces tokens categorized as ordinary or special.

synAnalyze.c/h: Syntactically parses the tokens from the lexical analyzer and separates the tokens into being the program name, arguments, and redirection files based on the order of input.

All code for the project can be found here.